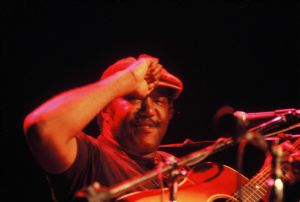 My guitar hero since 1964. I grew up in Hamilton and Dundas and loved Jackie.

He was a gem, wasn't he? I loved his natural ease and affability on stage. I have his album with Ken Whiteley and Mose Scarlett.

I have every record he ever made, including one single 45 with "The Mystery Band".

In 1960 I had learned all three chords. I played a tune called Jack O' Diamonds, learned from a Burl Ives song book, that used two of them.
I went to see Jackie at the Black Swan Coffee House on Houston Street in Hamilton and he played the same song using two chords per measure. I went to Waddington School Of Music the next day and bought Mickey Baker's yellow and black Jazz Guitar Book and started trying to play like Jackie. Al Kirby and I included Jack O' Diamonds on our first album, Sittin' In The Kitchen, played, I hope, in Jackie's style.

I got a chance to spend some time with Jackie a few years back and drove from Hamilton to Port Hope and back with Jackie riding shotgun; a conversation that I'll always treasure. My brother met him at a party in Hamilton 5 or 6 years later and when he found out he was my brother, he said, "Jim's got a birthday coming up next week." How he could remember that with all those songs taking up space in his memory, I don't know.

You should post your memories in a new thread. Maybe some of us fellow Canucks can add memories.

When Ken Whiteley came to the Octave Theatre here, there were memories of the time the three (Ken, Jackie, Mose) played (before I lived here). Jackie was hospitalized (heart) and they sneaked him out to play the gig.

I once hired Jackie to play at Cobourg's Folk At The Forum, our local folk club. I recall phoning Jackie and having him say, "How did you get my number? Most people phone Bill Powell."
I said, "Your name's in the Hamilton phone book Jackie."
He said, "Now I don't have to give Bill his cut."

A couple of weeks before the gig, Jackie phoned me and said that he was sorry, but he couldn't make the gig. He'd just had his leg amputated.