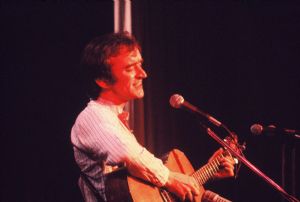 I recall seeing Martin and Dave Swarbrick at a small folk club, held at a small church in Tweed. I think it cost about $3 to get in and there were fewer than 100 people. I asked Martin at the break how they could afford to get them. He said, "It's less than we usually get, but it looked like a fun gig and we were in the area anyway."
I asked where else they had been playing and he said they'd been in London the night before. I said, "That's not in the area. It's 4 hours away."
He said, "Well they're both in Southern Ontario."

I had their album, then bought what I thought was it on CD (after I'd stupidly ditched my albums when we left T.O.), but it was another one - so they had at least two.

Martin was performing with the Watersons, at Mariposa Mainland.

We recently got Connie Kaldor and Garnet Rogers 'cause they were between gigs in Ottawa and Toronto, and it fit right in.

'Goodtime Americana or Custom Made? ' 7 hrs