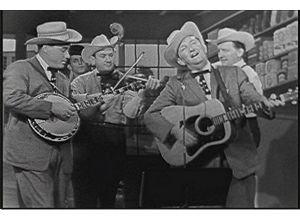 Looking at this old picture of Lester makes me wonder why Martin hasn't done a Lester Flatt model guitar. Mike Longworth worked on this guitar, and that makes two big associations with Martin.

Well, My guess would be that the Martin folks would rather not cover up the soundboard with that much pick guard. No doubt that Lester ought to be honored in such a manner!

Lester Flatt and his wife invited the very young and talented Marty Stuart to live in their home in Nashville when Stuart was launching his career as a teenager. Stuart found the guitar in a spare room of the Flatt's house and he immediately recognized it as the Martin that Lester Flatt had played throughout his long and illustrious career. Flatt gave Stuart permission to play it. The D-28, which is now owned by Stuart, had been uniquely customized over the years with special fingerboard inlays and an enlarged custom pickguard.

Lester Flatt, a native of Sparta, Tennessee, was born in 1914. An innovator and composer, he was one of the first bluegrass artists to play in Carnegie Hall. A frequent performer at the Grand Ole Opry, Flatt was a star of television, radio and motion pictures. He and his partner, Earl Scruggs, are known for a number of bluegrass favorites including "Foggy Mountain Breakdown" and "The Ballad of Jed Clampett" (the theme from the Beverly Hillbillies and the first bluegrass song ever to hit number one on the charts). Flatt, a member of the Grand Ole Opry, died in 1979.

The unique inlays on the original Lester Flatt D-28 were done by historian, author and inlay artist Mike Longworth prior to his long and illustrious career with The Martin Guitar Company. Mike began doing inlay work in 1955 while he was still in high school and most of his early jobs included the inlaid letter "L" (for Longworth) and a number designating the sequence of his work.

Longworth's fifth inlay job was the famous Lester Flatt guitar, hence the "L*5" inlay at the 17th fret which indicates "Longworth Professional Inlay Job #5." Flatt's first name, Lester, is engraved in block letters into a Mother Of Pearl panel between the 14th and 15th frets, and larger than standard Mother Of Pearl notched diamond inlays appear at the 5th and 9th frets, with double diamonds at the 7th and 12th frets.