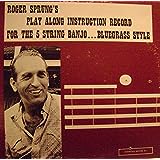 It’s a gem. But, like with most gems, you have to dig to get its full value.

I first met Roger at the Philadelphia Folksong Society’s Spring Thing weekend two months after getting my first banjo. He led a “beginner banjo” workshop, taught me his introductory roll (his “incomplete forward roll”) and how to play it with the proper bouncy rhythm. At the end of the session I purchased his instructional CD. When I first listened to it, I was disappointed. The CD included only one page of written material (originally the back of the LP jacket): just a few chord diagrams, the chord progression for 6 songs, and a few other notes. There wasn’t a lot of verbal instruction on the CD itself, either – just some scattered comments. Mostly, it was Roger demonstrating 3 not-so-standard rolls and playing 6 songs using these rolls. When introducing his rolls, he didn’t even tell you which strings to play, just which fingers to use. I listened to the CD twice, then put it away.

A year later, I decided to give Roger’s CD another try. But this time, I didn’t just listen – I copied. I played through the CD with my banjo on my lap, trying to duplicate what I heard. After all, it is a “Play Along Instruction” CD. It changed everything for me. After months of struggling with tab and the Murphy Method, playing arrangements that didn’t sound much like they were supposed to sound, a light went on. I had found an overall approach to playing songs that I could apply – by ear – to most anything I wanted to play.

This was REALLY learning by ear. It wasn’t watching and copying. It was listening and copying. On reflection, I can’t think of anything that would be gained by producing Roger’s CD as a DVD.  In fact, it would detract from the effectiveness, as it then would be a “watch and learn” recording, rather than “listen and learn.” With no video, you’re forced to listen, and that’s a developed skill which should not be underestimated.

In 1984, Roger was interviewed by "Frets" magazine.  He was asked what makes his teaching method unique.  He said:  "The students don't read music or tablature.  I work with songs that the students already know how to sing by heart.  I teach them the basic rolls, then they put the songs to the rolls, and not the rolls to the songs."  In other words, you don't try to add roll notes around the melody of a song; instead, you keep the roll going, playing the song's melody notes within the roll where you can.  Roger has you play entire songs – and lots of them – with a single roll, thereby showing you precisely what that roll can (and cannot) accomplish.  He does this with various rolls.  Ultimately, you learn which rolls work best in which situations.

Roger teaches three rolls on the CD – and not the ones you’d expect.  They’re called the “incomplete forward roll,” “rolling (or running) through the beat,” and the “thumb in and out forward roll” (not to be confused with the alternating thumb roll). He calls out the finger sequence (using the numbers 1, 2, 3). By listening carefully, you can tell which strings he is playing. You also have to pay close attention to the rhythm he uses (both when he plays, and when he calls out the finger numbers). Developing that rhythm is vital to Roger’s instruction.

Roger then plays a G-C-G-D7-G chord progression using each roll, one at a time.  If you play along with these exercises, you learn not only these rolls and the proper bouncy rhythm to use when playing these rolls, but also how the strings you play can vary, even though the basic roll structure and finger sequence remains the same. For his “thumb in and out forward roll,” he also shows you 4 specific variations.

Roger then plays 6 songs: “Skip to My Lou,” “Aunt Rhody,” “Old Joe Clark,” “This Land is Your Land,” “Home Sweet Home,” and “Cripple Creek.” He plays each song 3 times – one rendition for each of the 3 rolls, using that roll only.  [This is his putting "the songs to the rolls, and not the rolls to the songs."]  Here is where you have to listen even more carefully because, by adjusting the strings played and playing non-chord notes, Roger is adding the melody notes of each song to his rolls. Suddenly, you realize that clear patterns are at work.  Each roll has specific, repeating spots reserved for the melody.  They may not be the same spots from roll to roll, but for any one roll, the pattern holds each time it is played.

I found that I could use this technique on hundreds of other songs. I could play through the song using each of Roger’s 3 rolls, adding the melody notes along the way. Now I had 3 different ways to play each and every measure of the song. So, when I began, on my own, to mix all 3 rolls together in a single song, I had lots of different ways to play it.

I still find Roger’s “incomplete forward roll” the easiest way to first try to pick a new song by ear. It’s really an instructional masterstroke, because it allows you to focus exclusively on the melody (played, with little exception, entirely with the index finger on the 3 “inside” strings) while the thumb just plays the 5th string and the middle finger plays the 1st. Roger calls it your “way in” to a song.

Roger’s CD doesn’t give you any of the fancy stuff: no slides, hammer-ons, or fancy licks (although Roger’s “rolling through the beat” works very well as a tag). But it does give you a solid foundation for playing the fundamentals of a song – the chords, the melody, and the rhythm – on the banjo by ear. From there, you can add other things on your own. You can add alternate rolls. [I found that the “Foggy Mountain Breakdown roll” also is a great one for accepting melody notes, fairly universally, on all 3 inside strings.] You can add slides, hammer-ons, and licks. But you need to be able to play the basics of a song on the banjo first.

I’ve bought a bunch of books and DVDs over the years. None of them taught me what this CD taught me.  None of them affected my playing as much.  It’s not for advanced players – although someone who has played only from tab for a long time, and is looking to make the break, should be helped. But don’t expect to learn from it through osmosis.  You have to listen with your banjo on your lap and play along, copying what you hear. It’s not called “Play Along Instruction” by accident.

Dear Richard,
Thanks for the blog. I have Roger's CD. He was nice enough to mail it to me and his method makes sense. I just haven't had the time to invest in it yet. I think maybe it was no accident that it made more sense to you the second time around. He said he plays at Galax sometime and I hope for a demo from him sometime. If you here he is going to be around NC or VA and can remember, please let me know.

Your blog about my Instructional CD is greatly appreciated, and I hope it will help many other people who want to play.

The above comment was posted by me, for Roger Sprung, at his request.

Thanks for the recommendation Rich! Where can I buy his instructional CD? I did a google search and didn't find anything. I did find a $60 banjo instruction course by Ritchie Mintz, called "Converstational Bluegrass Banjo." Are you familiar with that, and if so, do you recommend it? Thanks again, Kevin (makemerry)

PS Richie Mintz sounds like he might have been a student of Roger Sprung and created a banjo instructional course that expounds on Sprungs approach.

I missed that. Thanks Rich!

Today May 21, 2020 I called Roger Sprung and he answered and we had a great conversation. When I came back from Vietnam I bought an ODE style C from him at his house in Newtown, Ct. What a great guy. We played Home Sweet Home together. He still teaches.