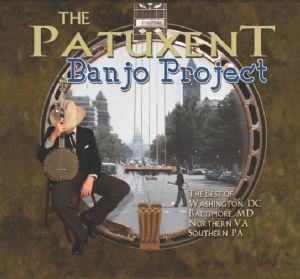 “The Patuxent Banjo Project” is a two disc set that brings together 40 of the best banjo players from Baltimore, MD, Washington D.C., Northern Virginia, and Southern Pennsylvania--many of whom have influenced each other throughout the years. The Baltimore-Washington Metropolitan area has long been a hub of Bluegrass Music. The CD brings together both well known stars and relatively obscure banjo players, and contains the work of three generations. The project covers original compositions like Casey Henry’s “Purple Creek” and old standards like “Cripple Creek.” The album comes with extensive linear and album notes. A three page introduction is included on the inside cover of the album. The set also includes a 40 page booklet which offers a short bio on each picker.

As for the album itself it features Bluegrass legends (and Country Gentlemen Alumni) like Bill Emerson and Eddie Adcock. With legends like this participating in the album how could it be anything else but spectacular?

The album covers the entire gamut for the banjo enthusiast. Nearly every style is represented from hard-driving traditional picking to chromatic to clawhammer and two-fingered style and other old-time styles. Russ Carson even provides a little bit of old-time fretless minstrel banjo on his contribution to the album entitled, “My Old Home in Baltimore” which, fittingly, is the last track on the album. The diversity of styles alone that are represented on this monumental album make it a must have for every student of the banjo.

Paul Brown, a morning news anchor for NPR, provides a spirited version of “Cumberland Gap” in the Old-Time style.

There is more good music than can be praised in this short review. The album is old-timey enough to be cute, just newgrass/progressive enough to impress the most discerning of ears, and just “folkie” enough to not turn me off. Truly this is an album with “something for everybody.”

As for the recording itself the accompaniment on each track is tasteful and adds to the overall pleasure of the listening experience. The track selection and sequence works well for me and the mixing and the mastering is spot on.

In short, this is a fantastic album—buy it!

To think that this is but a sample of only some of the best banjo players in the area leaves me wanting more. Perhaps if we are lucky we will be getting another two disc set in the future. For now this album is more than enough to satisfy.

Review of Sticky Picks and Gorilla Snot âWorthwhile or another temptation to over-accessorize?â

"The Black Pony" banjo is coming along!

Long, long, long neck banjo is on the way!

'Messing around with Durang's Hornpipe.' 3 hrs

'Looking for a new to me banjo' 3 hrs