Please note this is an archived topic, so it is locked and unable to be replied to. You may, however, start a new topic and refer to this topic with a link: http://www.banjohangout.org/archive/380635

Last winter there was hardly any. We didn't have to shovel out more than twice. This year we have had so much of the stuff, there's no place to put it all. We've been shovelling at least once a week, and last night and this morning we got another foot. The piles on the sides of our driveway are higher than my head. Go figure. 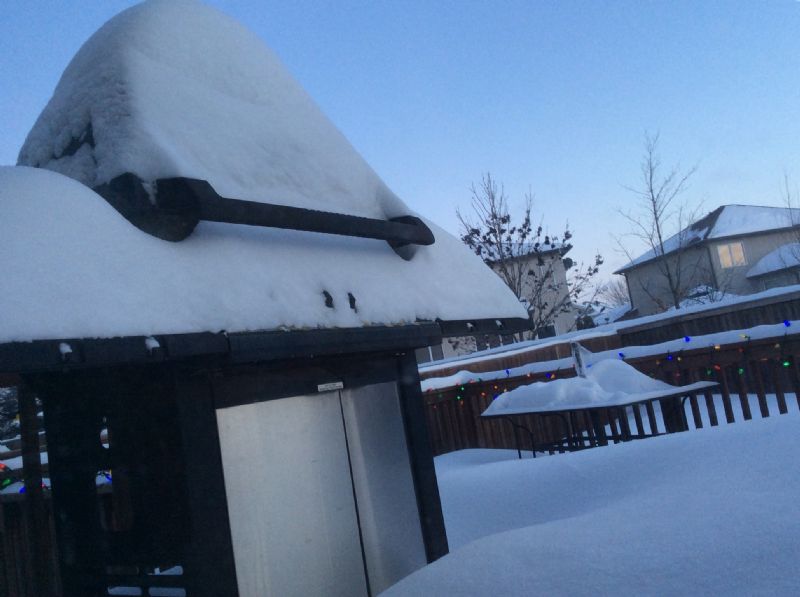 It won't reduce the amount of snow that falls, but a snow blower reduces the "build up" ... dunno just what the factor is, but it's a l-o-t.  And as a bonus, if you get a ride-on you get some "fun" as well.... unlike the shovel/scraper method.  And as a double bonus, if you aren't already the  most popular guy on your street you soon could be.

Having said that ^^, I'm using our track-driven blower more this winter than normal... doing the whole driveway rather than just half and "packing" the other half.  But today a couple of young men drove up and offered to shovel the walkway/driveway for $20; so I rewarded their initiative.

I think I recall hearing on the radio [yesterday??] that so far we've gotten just a little bit more than "normal."

Edit: Personally, the worst (?)  part is when the build-up beside the back deck mean I have to chuck it up-and-over.... but I don't recall a winter where that hasn't been the case at some point.   And I guess for farmers, more is better.

Itâs about time yooz guys in the Friendly got some regular exerciseâ¦..

don't feel bad ,,it took me 2 hours to find my snow shovel... been so long i forgot where it was.... now if i can remember where i keep my strong back.

Can't use a snowblower. I wish I could. But we live on a pie-shaped lot (my son says no, it's a piece-of-pie shaped lot), so if I tried to blow the snow it would all end up on my neighbour's driveway.

We haven't had any significant snow yet this season here in southeast Michigan, which is unusual.

We have been having colder than average temperatures lately.

There was 8 inches of ice on the lake last Saturday and pulling the sled across ice with no snow made it easy.

This was the first significant snow dump in two years. When I was working on the small mountain of snow the City plough left across our driveway, a younger (than us) couple walked by. The guy said, "One day! One day!" All I could answer was, "Just be thankful it all doesn't fall in one lump!"

I never, ever, got tired of watching Montreal's snow clearance - and it usually took place at night: the flashing lights of the police cars looking to remove cars parked in spite of the warnings, the ploughs lining up the snow into one giant furrow, the snowlblower dumping the snow into a dump truck as it moved along, and the line of dump trucks behind waiting their turn. Then the road and sidewalk were (relatively) clean.

In Toronto, for the main streets, there was (is) the huge snow melter, with the conveyor belt on the front which dumped the snow into the melting tank on the back. Crews would make sure the drains were clear, and the dirty brown water would rush down.

Here in Kingston, it just means that parking spots stick farther out.

In my home town snow was plowed in piles. Then a truck with a scoop picked snow up, and drove to the shore of large river and dumped the snow there. An older gentleman and his horse plowed all the sidewalks. Now technologies have improved, city workforce increased, and sidewalks are no longer plowed.

I'd do our sidewalk, then do the neighbours' immediately north of us, Mike's & Julie's, then the next, Lorna's. I'd skip the crazy people next to them, and do Horst's & Lillian's. To the south I'd skip our awful next door neighbours, then do Lloyd's & Stella's. This was usually on a weekday morning before heading off to school.

In Montreal there were sidewalk ploughs. No problem.

My street is just tar & gravel. The village plows all the snow over to my side of the street and pushes the pile to sit in the ditch. It melts in the spring and drains away like it does every year.

It won't reduce the amount of snow that falls, but a snow blower reduces the "build up" ... dunno just what the factor is, but it's a l-o-t.  And as a bonus, if you get a ride-on you get some "fun" as well.... unlike the shovel/scraper method.  And as a double bonus, if you aren't already the  most popular guy on your street you soon could be.

This is true probably 99% of the time.  We had one winter several years ago where the snow ended up being so deep the snow blower could not get above the mounds along the side of the driveway.  That is a (hopefully) rare exception.  But I do prefer the "neatness" of the snow blower over shoveling or plows.  I like the speed of plows better than the work involved with the snow blower.