Please note this is an archived topic, so it is locked and unable to be replied to. You may, however, start a new topic and refer to this topic with a link: http://www.banjohangout.org/archive/375019

Like the title says, I just bought myself an old Strom banjo. What little Iâve read said the company was acquired in the early 70s, so I figure itâs at least that old, but there is no serial number or model name or anything like that anywhere. The rim(? I may not know the right term) looks to be made of cast aluminum, and the neck sure is pretty wood. Anyway once I got the bridge in place the intonation is good and the action height where I expect from my other instruments. The tuners work, but boy are they sensitive compared to what Iâm used to! Based on the hardware and stuff Iâm guessing itâs not a particularly high end model or anything, but at $150 with a hard case I think I probably did just fine. Anything else I should know about this one before I head off to try and learn from YouTube?

Welcome buddy, and congrats on your new banjo!

Although Iâve never played one, Iâve always heard that Stromâs were really good banjos. I believe Roni Stoneman played one at one time or another. Itâs not a prewar Gibson...but hey...lots of great banjos out there that sound and play phenominal that arenât.

Post some pics when you get a chance please.

Gosh I thought I had included pictures, here we go

That's a nice looking banjo and you got a great deal on it! When you said cast aluminum, I thought bottle-cap banjo, which it's clearly not. I don't know anything about Storm Banjos, but from it's construction, I'd guess it to have been made no later than the 40s.

I've seen photos of Strom resonator banjos but never an open back. If it's the same Strom, then the company was bought by C. C. Richelieu sometime in the 70s and became, well, Richelieu.

I think I have one of the last Richelieu 5 strings, so you basically have my banjo's ancestor.

Makes me wonder if it originally had a resonator, removed by some previous owner long ago.

Strom banjos was acquired by Richelieu in 1972.

Your rim is a slice of aluminum tubing and was made years earlier. It is so similar to the early 1960s ODEs (also made from 11" aluminum tubing) with the same Elton hardware that I would guess 1960–'61 or so. Assuming that Waverly tailpiece is original, I've never seen one earlier than 1961. Like ODE, Strom abandoned the tubing in favor of their own rims shortly after.

In a recent thread, I found a source for that tubing in case someone wants to recreate the past. Frankly, I can't imagine that anyone ever will.

The tailpiece is strung the wrong way, this is how it is supposed to be: 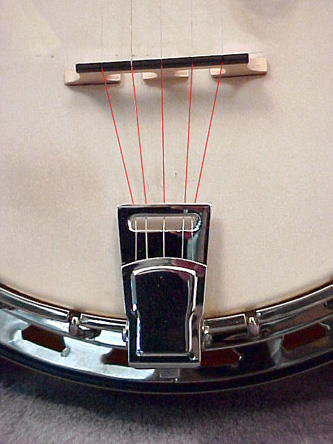 Vielen dank Emiel. Looking closer, the tailpiece is also bent pretty badly where it contacts the rim. Iâll have to order a replacement and some new strings. Maybe a new head as well, it looks like this crooked and incorrectly strung tailpiece has started to poke a hole in this one.

I had a Strom banjo years ago. It was a much later model than yours. Yours looks to be a very early Strom banjo as I have never seen one, not that I have seen that many, with a wood perch pole. Most Strom banjos I have seen had wood pots with metal coordinator rods.

I donât think Strom made too many instruments before Richelieu bought them out in the early 70âs. They were high quality instruments for the time. At one point I think Roni Stoneman played a model similar to the one I had. Nice players, loud and good materials. I have heard that the woods used were local to Wisconsin or Minnesota. Strom machined most of the parts himself as he was the owner of a mid-sized lawn mower factory.

Pretty rare instrument there and a nice one to have.

The one I had is pictured below

Vielen dank Emiel. Looking closer, the tailpiece is also bent pretty badly where it contacts the rim. I’ll have to order a replacement and some new strings. Maybe a new head as well, it looks like this crooked and incorrectly strung tailpiece has started to poke a hole in this one.

I can't see if it's bent, could be of course. But maybe you just have to put it straight with your hands. If you should buy a new tailpiece: this so-called "New Waverly" tailpiece, which ist still being produced, is very difficult to string, also it's plated steel, not brass, it doesn't sound so good I think. Maybe it's best to just put a Presto tailpiece on your banjo (nickle-plated brass). It's a good tailpiece for almost any banjo (except for primitive banjos like the gourd banjo etc.). The Waverly Oldstyle is also good, plated brass and more adjustable. Sounds more focussed than the Presto, probably closer to the New Waverly.

The little points that like to poke holes in heads can be taken down with a file — a common modification on these — and if that piece of metal with the point is bent, easy to straighten with pliers. There's also a trick to stringing these but other 'pieces are easier. If, however, the 90° bend is out of whack and won't hold, metal fatigue will cause it to break someday.

New reissues are easily found and are inexpensive. Likewise, as Emiel says, there are other tailpieces that are easier to string. The only thing I don't like is that new tailpieces look so new — but aging nickel is very easy.

'FOR SALE: Lot of 2 Banjo Heads For Open Back Banjos' 4 hrs

'Lot of (2) Banjo Heads For Open Back - Fiberskyn, Renaissance' 4 hrs