Please note this is an archived topic, so it is locked and unable to be replied to. You may, however, start a new topic and refer to this topic with a link: http://www.banjohangout.org/archive/357372

I just bought a Crestwood banjo that was built in Japan sometime in the early 70's. I cleaned it up and then I put D'Addario J63 Tenor Banjo Strings on it.

I learned 3 chords on it so I could make this video. Does it sound like it should? I will use it to play some ragtime for some nursing homes. I was wondering if it needed any fret or neck work?? Does it sound like it's suppose to? Or should I say... does it have potential to sound like it should, once I learn to play it properly? I'm sending a video along . I play each string going up the frets which should help determine if there is a problem . Thank you for listening to the quality of the banjo...not the banjo player :) 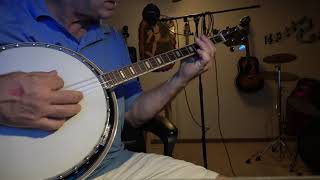 The picture on Ebay

As I go up the frets...it seems to loose it's tuning a bit. I know I won't be up in that area playing chords...but
I thought I would get others opinions on if the neck... frets...or bridge need some attention. Thanks for your response.

If it frets sharp move the bridge toward the tailpiece.

As I go up the frets...it seems to loose it's tuning a bit. I know I won't be up in that area playing chords...but

I thought I would get others opinions on if the neck... frets...or bridge need some attention. Thanks for your response.

From the quick video viewing it sounds like the notes are progressively getting a tad flat?  Double check by creating a chime at the 12th fret.  You do that by LIGHTLY placing your finger at that string location and plucking the string.  You'll hear the octave note, created "twice" as your fingertip divides the open string fundamental in half.  Listen to that chimed note and then pluck the same string while pressing it down to the 12th fret.  Ideally the note will be the same.

If the fretted note is FLAT shift the bridge toward the neck a small amount and re-check.

(Move the bridge by holding the banjo with the neck facing away from you and grasping the bridge at each end between thumb and index finger.  Scootch one end at a time and you'll have great control of the small movement necessary to shift the bridge position.)

If the fretted note is SHARP shift the bridge away from the neck a small amount and re-check.

Alternate your harmonic vs. fretted note checks between the first string and the fourth string until they closely match for either string.

Many players place a couple small pencil marks at each bridge foot location so the bridge location can be double-checked visually without the need to go through this process.  It really only takes about a minute to do the entire intonation check once you become familiar with how to do it.

If it plays easily and doesn't buzz when you play strings the bridge is the right height.

The caveat would be that the head is tensioned correctly.  Most players find a string height of around 1/8" at the 12th fret is in the general ball park for proper action.

The other checks that affect playability are string height at the nut and neck relief (the slight forward bow of the neck).  You'll find that information with a quick search of the archives; it's been covered many, many times previously.

As Steve says, move the bridge a little towrd the tailpiece. The octave should sound at the 12th fret, and can be checked with your electronic tuner. The bridge seems to be the correct height; I don't hear any buzzes.