Please note this is an archived topic, so it is locked and unable to be replied to. You may, however, start a new topic and refer to this topic with a link: http://www.banjohangout.org/archive/356718

After seeing what KT Tunstall could do with a looper I realized this device could benefit someone that plays alone at home. I am presently looking at the Boss RC-3 and RC-30 pedals.

Both models have both been around for several years. I don't know if that is because they are still relavent or simply continue to be popular because KT Tunstall uses one. Does anyone have experience with these pedals? Other recommendations?

I had the RC 30 years back. I used it for guitar. Fun pedal. It takes some practice to time your loops right so they are not a little off beat but itâs not too difficult. You can tap one of the pedals to set the tempo and have a click track if youâd like. Iâd recommend it if you arenât afraid of a little learning curve on mastering its use.

I use a Boomerang which has an input that locks in to the output of a Beat Buddy that serves as the worlds most expensive metronome....all because I wanted a metronome that put out a midi clock signal.

This way all you loops cut on the beat no matter what.

I need to get it out and play with it some more.

The Boomerang is awesome....

Those are still heavily used by touring pros like Tash sultana.  Boss newer models have gotten very good reviews, the RC-10R in particular looks interesting.  you could also look at Electro Harmonix, TC electronics, pigtronix if you're looking for features they don't have. The EHX have a good combination of features, sound quality and robustness (the footswitches are the weak link on some loopers, since they're getting hit a lot) musicradar.com/news/best-looper-pedals

Once you get into multiple hundreds of dollars, you might also think about getting a MIDI footpedal to control similar functions in your DAW.

After seeing what KT Tunstall could do with a looper I realized this device could benefit someone that plays alone at home. I am presently looking at the Boss RC-3 and RC-30 pedals.

Both models have both been around for several years. I don't know if that is because they are still relavent or simply continue to be popular because KT Tunstall uses one. Does anyone have experience with these pedals? Other recommendations?

Looping is great fun, and it's especially good for working out new tunes and songs.  I began looping when I purchased a new $60 Zoom G1ON multi-effects pedal for my new guitar. (That's another story...)  The G1ON is sitting to the right of my song work book on the shelf directly above the Cube Street in the photo below.

The Zoom G1ON has a built-in 30 second looper, and I thought I'd give it a try, having never used a looper.  I liked it... a lot.  I now "practice" a couple hours about every other night.  Everything's plugged in, all I have to do is flip the switch on the outlet strip, sit down, and play.  After doing this for the last 3 or 4 months I still flip off the power switch after I'm done and say "I LOVE doing this !!!"  I've been playing music privately and semi=professionally for the last 35 years and it's one of the few things I started doing that I can honestly say is making me a better player.

The next step was to delve a little deeper, as the 30 second loop length wasn't long enough for a verse / chorus or entire song loop.  I purchased a Boss RC-1, and this was much better.  When you start getting into loopers you'll soon find many of the basic models have a single button.  While it CAN be used, it's MUCH easier with a dedicated stop button.  I built a dual foot control for the RC-1, and that worked fine but it's a klutzy way around just having a two button looper.

I THEN purchased a Electro-Harmonix 720 looper ($160), which sells for the same as what you pay for a lowly RC-1 and a power supply, which isn't included with a Boss RC-1.

Electro-Harmonix is a well-respected solid company who has been around for a LONG time and invented many of the early guitar pedals.

The EHX-720 has some neat features and is easy to use. It has 10 storage slots, 12 minutes of memory time (I don't hit the memory limit with all 10 loops used), you can program the STOP button to fade out loops (several selections for fade time), and you can set the display to count up to 10 to show your progress in the loop for really long or complicated loops.

The fade feature is really cool, as if you're simply playing along with loops it's much nicer to fade on your last loop as apposed to abruptly stopping cold.

A shot of my current practice area is shown below.  Another cool thing about the looper is the inputs and outputs are stereo (most loopers are) so I run the guitar through the left input to it's own amp (the Cube) and the bass is fed through the right input to the Fender Rumble 100 bass amp.  The guitar and bass are totally separate and individually controllable.

In most cases I simply play a backing rhythm guitar track down as a first loop, place my guitar in a stand, pick up my bass and rehearse / record a backing bass track, then play along with my new "accompanying band", sometimes I capo up and record the second guitar part using alternate chords or melody structure.

I can definitely recommend the EHX-720 as a good balance between price, functionality, and ease of use.  I would not recommend that you go with a more advanced looper to start with, as it does take just a bit of practice to get looping down.

The best advice I can provide to start with is to learn to tap the RECORD button ON THE ONE COUNT and hit the STOP button (or the loop play) EXACTLY ON THE ONE COUNT of where you want your loop to come back in.  This, for me, is usually after I've recorded a verse or two and a chorus or bridge section.

No banjo yet, but there will be sometime this winter.  I'm working on a entirely new concept for banjo amplification that's going to work great with the looper. 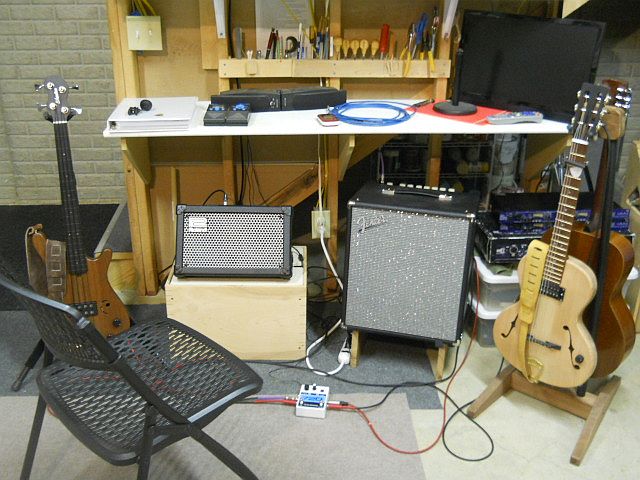 I want to thank everyone for the information. It came down to either the Boss RC-10R or the Electro Harmonix 720. I went with the EHX because it was half the price or the RC-10R, and because of persistant concerns about the user friendliness of the Boss loopers. I can upgrade later if I want more bells and whistles.

'Questions about this oddball no name banjo' 5 hrs

'Tips for switching from CDGA tenor to 6-string, but playing the same music?' 9 hrs