Please note this is an archived topic, so it is locked and unable to be replied to. You may, however, start a new topic and refer to this topic with a link: http://www.banjohangout.org/archive/350087

I own a flat-body electric tenor guitar. In a previous life a three-quarter electric six-string of unknown provenance.

At one point, I considered having a banjo ring and head built into its body, but ultimately decided against it. The risk too great of ruining an instrument I'm really attached to. But also because electric tenor guitars are hard to come by, in Europe.

My aim, at the time, was playing and recording with as little audio volume as possible. My electric tenor indeed pretty noiseless, when practicing unamplified.

The same theme has come up again now, so I'm curious.

Has anybody on this forum practical experience with electric tenor guitar with in-built banjo head and ring? Something in the vein of the Gold Tone EBM4, for instance?

Let's put it like this: what's the sound volume of electric tenor guitar with added banjo head like, if played unamplified, compared to acoustic banjo? Would the neighbours still bang on the walls, if those walls were actually no more than thin perspex separations?

No reply at all? So no one on BHO has ever touched a Gold Tone EBM4 electric tenor?

I've never heard of one until you mentioned it vt. Sounds pretty cool though from what I hear online

Gold Tone banjos are pretty expensive, I noticed. Their EBM4, too. Incidentally, David, what might interest you (and folks on the Scruggs forum, too, maybe), that Gold Tone also has an electric 5-string in their range (EBM5)! Since you're on 5-string as well, I understand.

Now, my beloved electric tenor guitar used to be a three-quarter six-string body electric, before modification. I consulted two luthiers on feasibility of building in tone ring and head - and both thought that it's doable.

Secondly, it seems that flat-body electric tenor guitars are being built again. I think I saw some advertised on Amazon - and reasonably priced, too. So given that there are many superbly skilful banjo builders on BHO, I'd guess that adding tone ring and head to an existing flat-body electic tenor guitar might be far more attractive than throwing a fortune Gold Tone's way.

Seems to me that IF appearance is not highly important, you could get a SIX string electric, and narrow down the neck, and add a banjo head, much like I did with this Six -to-Five conversion 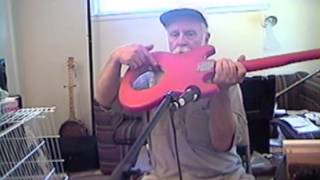 Exactly, Mike! Appearance doesn't really matter. Question though: was the electric tenor you built a full-size standard electric, before modification?

I'm wondering now as to whether this subject might be better placed in Building & Repair.