Please note this is an archived topic, so it is locked and unable to be replied to. You may, however, start a new topic and refer to this topic with a link: http://www.banjohangout.org/archive/349735

Brain Play Â· Danny Gottlieb Â· Luis Bonilla Â· Kenny Rampton Â· Chris Hunter Â· Gary Valente Â· Earl McIntyre Â· Scott Robinson Â· Eddy Davis Â· George Gruntz
The music is by Geroge Gruntz (Scott pointed out his name makes a sentence!) The Contra-bass Saxophone is my "The best musician I've ever met" Scott Robinson and the Tenor Banjo is by Eddy Davis.
We sight read this in Clinton Recording Studio (The big room) in Manhattan, NY. There were several other New York Greats playing the session - It really had me on my toes!!!! This was the kind of stuff that went on in "The Big Apple". Man have I had a LIFE. (A Minstrel) 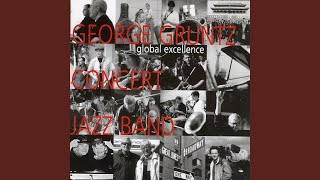 When was this recorded?

I like experimental music, great stuff. Was this more of a chordal improv concept By Mr. Gruntz.....like some Miles Davis approach? or did he write melody lines for every instrument?

Every thing is written out for me. All extremely Avant-guard Harmonies. You know I thought several people would ask about what this composer wanted and liked about the 4 string in his music. Being a composer myself, I'm much more impressed with him and the Banjo than banjo players. He thought the Banjo was worth composing for -- All my years, and I can't for the life of me understand what (so called) banjo players are doing playing the Banjo? All the banjo people get around to asking "Why isn't the banjo popular"? I tend to think it's because everyone of them are too selfish to get behind someone when they try to do something that my further the Banjo as a Musical Instrument. In my small way I've tried to do Musical things with the Banjo, but I've never found that I've been back by very many Banjo Players. I've found them all very selfish about what THEY want to do TO THE BANJO -- instead of helping to extend the Banjo as a Musical Instrument -- the same as a Trumpet - Piano or any thing the public things of as a Musical Instrument First. I guess I'll never understand it and the 4 string banjo will go on as a NOVELTY. Once again, I must get off of my SOAP BOX. Eddy (A Minstrel)

I understand your point. For years the piano accordion (my first instrument starting at age 6) was considered nothing more than an ethnic or novelty insturment.  When the accordionists William Schimmell and Guy Klucevsek started being bold and inventive with the instrument only then do I think they were able to break it out of its ethnic and novelty consideration. The accordionist Charles Macerollo in Canada was another accordionist who would not be restricted by the ethnic/novelty point of view.

I think you, Eddy, and Cynthia Sayer started to broaden and stretch the boundaries of the tenor banjo (Bela Fleck certainly did with the 5-string banjo). It might take a collaboration with you and Bela Fleck to bring more popular attention to the possibilities of the 4-string banjo. I think of the younger generation, at least of the musicians I know of,  Tyler Jackson has the talent and ability and creative instinct to take the tenor banjo into a new world. I’m sure there are others but he has the great advantage of his youth right now. Don Vappie, also, especially with his strong background in New Orleans music. Somehow the instrument has to be taken out of its “designated” role in traditional or classic or Dixieland jazz. Not that there is anything wrong with those genres of music. As a beginner tenor student I am having a great time learning traditional jazz. But, I too, would like to hear examples of the tenor banjo played in that groundbreaking style  you, Eddy, have done in the recording you shared.

About 30 years ago a mandolin playing friend of mine commissioned Ornette Coleman to compose a piece for solo mandolin. My friend said he was unable to play it but that the conposition really explored new ways of hearing the mandolin.

I’m guessing part of the problem is that the 4-string banjo is not part of the jazz curriculum in colleges. Not being taken seriously by educators means that exposure to the banjo is being denied to students who might very well get turned on by its characterisitcs and tonal possibilites and its own set of pecularities which need to be explored so as to take them from being “peculliar” to being “cool.”

And, now I leave my soapbox!