Please note this is an archived topic, so it is locked and unable to be replied to. You may, however, start a new topic and refer to this topic with a link: http://www.banjohangout.org/archive/332889

This is (in my opinion) one of the greatist songs ever written. The first time I heard it was on a video of Duke Ellington playing it as a piano solo. It stabed me right in the heart. He was obviously feeling as I did and mentioned it was written by his alter ego the great writer and his friend and colabarator for a life time Billy Strayhorn.  The only other recording I could find was Duke and his great Baritone Saxophonist Harry Carney.  That's the story of this Lotus Blossom.

Now for the story of the Pietsch. I was envited to perform at a Banjo Festival in Germany. While there, I encountered Norbert Pietsch and his lovely wife. He had been making outlandish Super Banjos for my old friend Stephen DiBonaventura ever since another great friend Dale Small past away. Norbert had a banjo there that Steve had ordered which he was finishing up at the time. Dale was making banjos with an 11 and a half inch pot and Steve had brought over the rims that were left when Dale had died. As you may know I love banjos with large pots. I took off the very fancy resonator (because I like open backs) and began to play it, upon Norberts request. Man -- what a sound that was. Norbert said I should make you one. The truth was I couldn't put the banjo down. After some talking Stephen finally OK'ed me to get one with an 11 and a half pot. Norbert made the banjo and I've had it for several years. It is arguably the best sounding banjo I've ever played as I think you can hear on this youtube. I ask myself all the time why I don't play it regularly. Well, a few things -- First I'm so comfortabe playing my shorter 17 fret necks -- It probably sounds silly but at my age the longer neck wears me out quicker. Second, I have two custom OMEs with 12 inch pots and 17 fret necks (with NO TONE RINGS) in my opinion you don't need one. So, they are very, very light to play. The second one I had Chuck and Tanya make for me, I had my very old friend and Luthier "The Great Carlo Grego" put a hinge in between the neck and the pot -- so when I undo the nut on the lower lug nut the neck swings up over the pot assemble and becomes very small package for traveling. (Polle saw it) AND THIRDLY - my OME's necks are finished with Tongue Oil -- FOR ME absolutely the BEST! AND my Pietsch has many coats of VERY beautiful finish on the neck, which for me is uncomfortable to play on. BUT I'd never change it -- It's BEAUTIFUL!!

So, since I'm older and older now -- who wants my wonderful Pietsch OPEN BACK TENOR BANJO? 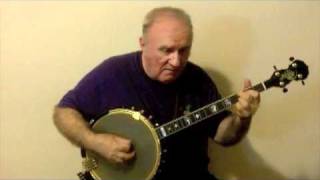 Beautiful song Eddy, Beautifully played. How much are you asking for your banjo?

Ooooh, that's luscious! Almost hypnotic. I'm like you, Eddy - I'd love to play on a Pietsch one day. Never even seen one up close. His work is extraordinary.

That certainly seems like a fair price Eddy. I met Mr. Pietsch last week in Nashville, and he had a Plectrum and 5 for around $7500-$8500. He's a super nice guy, an impeccable craftsman, and certainly one of todays elite banjo builders. GREAT banjos.

I'm going to try to learning this one today. It's a beautiful song Eddy, and you play it beautifully.