Please note this is an archived topic, so it is locked and unable to be replied to. You may, however, start a new topic and refer to this topic with a link: http://www.banjohangout.org/archive/326276

Does anyone have access to a Lyon & Healy catalog from the 1890s, or could you point me to where I can find such? I am curious what price they were asking for the "Star" line of banjos, and where the "Star" fit within their range of price points. I just came across an early no-rim-stick model that looks quite like what is described in a patent issued in 1891:

Some images are below. The "tailpiece" isn't really a tailpiece: it is a cover over some holes through the rim for holding strings, as described in the patent. I believe this is the same banjo as sold by Lyon & Healy under the "Star" name, though I cannot find any trademark (I have seen images of the Star line with branding on the heel cap, but this one is blank). Please correct me if you know better.

No help here on prices... but the following page from Washburn Prewar Instrument Styles: Guitars, Mandolins, Banjos and Ukuleles ... By Hubert Pleijsier refers to the Star as "upscale." It also shows Durkee's patent.

the other photo is of a mark on the back of the peghead of a "Star" banjo, which seems to contain what may be an L&H monogram.

Thanks for the reply Jim. I saw another old forum on BHO where someone asserted with some confidence that the stamp in your picture (from Mugwumps) is from a banjo made by Matthews in England. What we can see of the headstock doesn't look to me like a typical L&H design.

I don't where the Star banjos fit into the L&H line but they were most likely toward the top. The best L&H hardware, nice inlays and double spun (pot metal spun inside as well as outside). Photos attached are of an L&H Star banjo with a dowel stick, I believe most were without dowel stick.
It is rare to find one that still has it's string cover.

OK4. With regard to the Matthews made Star brand. Here's a link to yet another banjo on ebay uk this week. Looks like another Matthews made banjo to me.

The L & H Star brand models are an interesting model. I vaguely remember seeing one that had a metal rod running through the length of the dowel.

Stephen, I believe that the Star pictured in Joe's comment above is the same sort that you are describing. I believe they just lengthened the bolt coming from the heel and transferred the fastening nut to the outside of the opposite rim. It looks like they may be using the same long brass hex nut as on the no-stick version. Also, I don't see any hardware fixing the stick to the rim: the wood stick may be cosmetic, like the Goose Acres banjos made more recently.

Someone claimed somewhere that the rim-stick Star banjos were made later than no-stick models. Maybe they had trouble selling banjos with no stick, or discovered a problem with the design.

The fancy stick in Joe's version certainly seems desirable. Mine seems like it is missing something... A STICK!

Joe here is the same peghead inlay on a banjo I have with no name. Came with a L&H tail piece

We have an answer: Jim Bollman has kindly shared images from two 1890s catalogs. Thank you Mr. Bollman!

The first is an L&H catalog, the second is another seller (Legg Bros. of Kansas City) offering what looks like the same line of Star banjos. The Legg Bros catalog does not mention the patented rim attachment, so their offering may have a rim stick like the one in Joe's comment. It also differs from the Lyon & Healy catalog in describing only 24 brackets for the 12.5" rim model.

(12.5" may be a bit of stretch unless they changed the specs: mine measures maybe 12-3/8" on the outside diameter of the tension hoop, and hardly over 12" for the head itself.)

So the price was about $40, roughly the same as a basic Stewart Thoroughbred or Fairbanks Special Electric (i.e priced like a high-end banjo with relatively modest ornamentation)


The L & H Star brand models are an interesting model. I vaguely remember seeing one that had a metal rod running through the length of the dowel.


This is a serious connection hardware for applying a banjo pot to a neck.

The heavy Brass flange is bolted to the pot with the hook shoe bolts and also has a wood screw on either side of the neck stick that go into the neck heel. 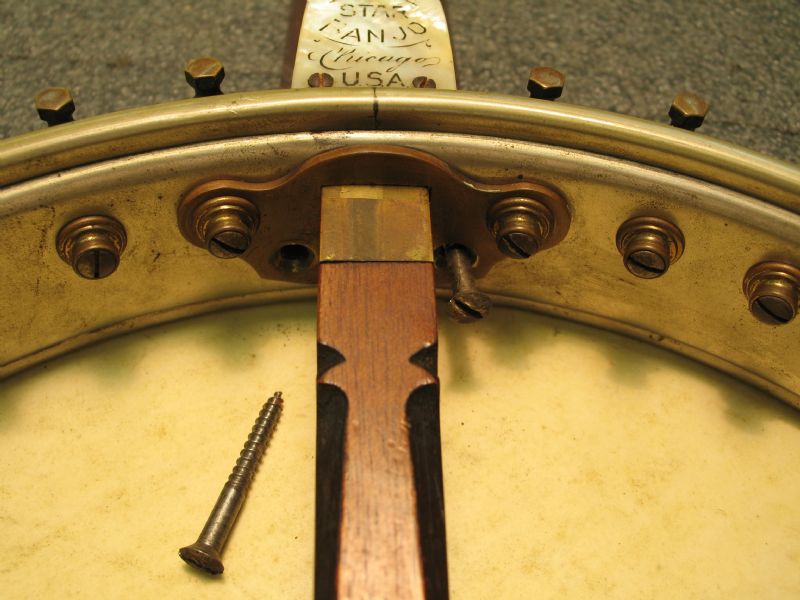 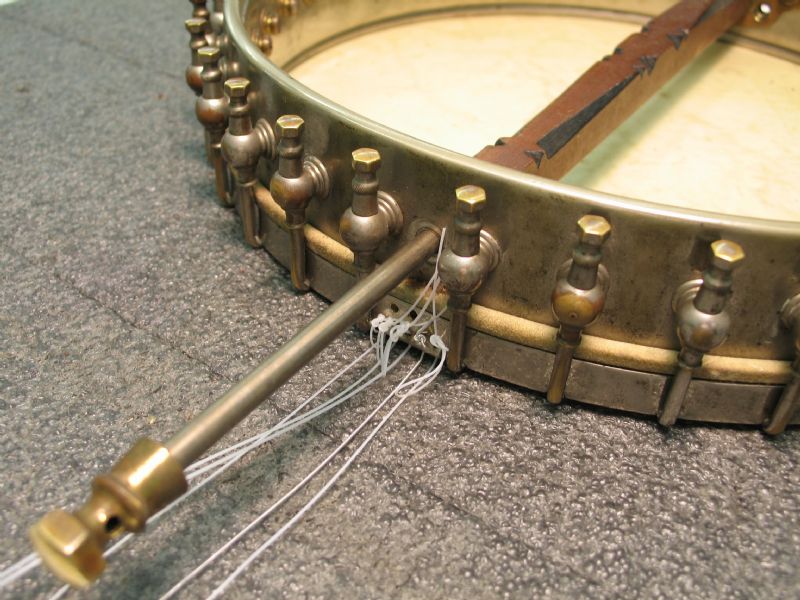 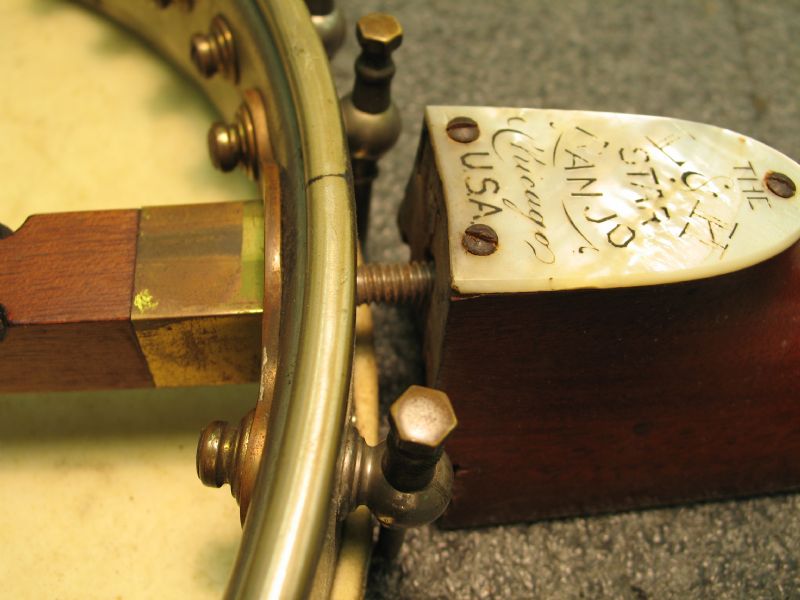 The barrel bolt nut is hidden behind the neck heel cap and has a wooden plug glued over it. 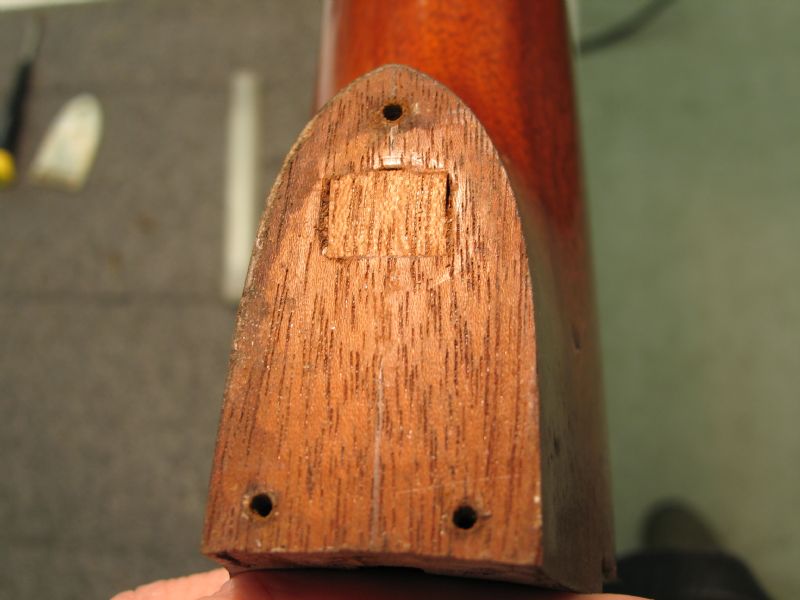 That's the one Paul, great photo's, thanks for posting. On my wish list.

Thank you Paul, those pictures are excellent. I am less curious to remove the heel cap now, given that the interesting hardware is hidden behind a plug.