Please note this is an archived topic, so it is locked and unable to be replied to. You may, however, start a new topic and refer to this topic with a link: http://www.banjohangout.org/archive/204405

Whenever I listen to an Eddie Condon recording, his plectrum guitar seems to be tuned differently.  In one youtube video, he has a short solo, and it does not sound like CGBD tuning.  What tuning did he use?

Thanks.  Your link brings me to this topic!

He definitely played Plectrum tuning. CGBD -- I use to live on the floor above he and Phyllis at 27 Washington Square North. After he died she gave me his last plectrum guitar to keep for her and she would ask me to come down and play it for her every once in a while. He originally came from Goodland, Indiana. ( I came from Greenhill, Indiana) His first banjo was a tenor which he played in tenor tuning CGDA. Then he saw a plectrum banjo and traded his tenor for it. When he switched to tenor lute and tenor guitar, because he wanted a guitar sound it was much easier to find tenors, since it was very difficult to find plectrum guitars. The last one he had was a Gibson plectrum, which he got from the company, but most of the other guitars he had were tenors. BUT always played in plectrum tuning. There are pictures of me with the guitar on my website. Somewhere I have some tapes of me playing it for Phyllis. I tuned it it Viola tuning, but pitched down to F as the fundamental FCGD. Eddy Davis 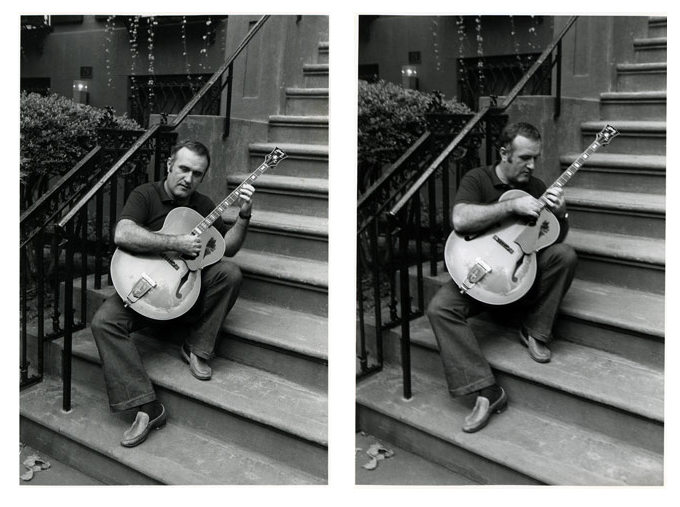 Don't flat your fifths, drink them!

Have you ever met Condon´s musical "twin" - Jack Bland - or had he already left town, when you arrived in NYC?

I´m for now studying the late 20s/early 30s banjo and guitar styles of Bland, Condon and St. Cyr - I want to incorporate some of this in my own playing - and besides I have Bland´s custom built B&D tenor here.

Another - off topic - question:  I´ve noticed, that you own a David Hodson tenor guitar - I wonder - how do you find it, compared with archtop´s?  I´m maybe going to order a somehow similar gypsy guitar from Leo Eimers (if he can meet my personal feature demands) - so any opinion/info from you will be highly appreciated by me.

About the picture of Eddy playing the Condon plectrum guitar -- it's interesting that he's using the classical guitar position to play it (putting the waist of the guitar against his left knee), rather than the usual archtop-type position of putting the waist against the right knee.  But it's also very understandable, as it puts the fingerboard at a 45-degree angle, which is very similar to how a plectrum banjo neck would be positioned.

Although true plectrum guitars are now quite scarce (and expensive), I'd like to remind everyone that it is possible to create something very close to one without a lot of hassle or expense.  Just take the two lowest strings off a six-string guitar and move the remaining four strings over one notch in the nut and bridge, which centers them in the fingerboard.  Then lower the D string to C and the E string to D, and you've got yourself a plectrum guitar.  I just did this with a $300 Yamaha thin-body cutaway electric-acoustic, and have been very pleased with the results.  You can read my recent thread about this at banjohangout.org/topic/202703   SETH

Fixed my link above.  That was weird.

I agree with Eddy Davis. I had the chance to play Condon's plectrum guitar, the same one Eddy Davis is playing, very soon after Mr Condon's passing. I took it out of the case and it was tuned to plectrum tuning. They told me that Mr Condon was the last one to play it.

'Could there maybe be a way to block/ignore/filter certain advertisers?' 1 hr